First, let’s tackle December’s writing numbers. December was a pretty good month for writing, especially considering how much time the holidays festivities consume. I had some time off, the crush of my autumn schedule let up, and all of that gave me more time to write and helped get my total up.
I wrote on 11 days in December and managed to add 4,510 words to the Project Formerly Known as the Novella. Because I was trying to finish the damn thing, it was the only project I focused on last month.
Did I finish it? Well, no. But more on that later.
First, let’s look at my year-end recap. The good new:  I wrote 138,389 words in 2012, a good jump over last year’s total of 105,984 words. 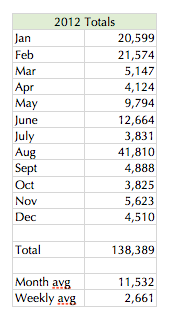 The most productive month was August, when I joined an ad hoc Nanowrimo group on Romance Divas and had a two week vacation. I wrote 41,810 words that month. It was awesome. The next two most productive months were January (20,599) and February (21,574) and I’m not really sure what sparked those bursts of creativity. The least productive months were July (3,831) and October (3,825), which coincided with my busiest work schedules, so at least I know what to blame when my word-count plummets.
So, that’s an increase of 30.57 percent from the prior year. Quantity wise, that’s not bad.
What did I write? The majority of my focus was on the Novella project, which has ballooned to nearly 80,000 words at this point. I need a better moniker for it, as it’s clearly becoming a novel. I wrote 64,354 words toward that story. This included some scenes that likely won’t make the final cut, but that’s all part of the process, right?
The suspense novel gained 30,273 words (but still not the two most important ones — The End). And I wrote 23,881 words on a novel that will someday be a sequel to the Bloated Novella project, with the working title of Trouble. I also added 11,031 words to last year’s Nano project, which has the temporary title of Pacific Daylight Time or PDT. I also finished an outline of this book in a spreadsheet, which wasn’t counted toward in my year-end totals. 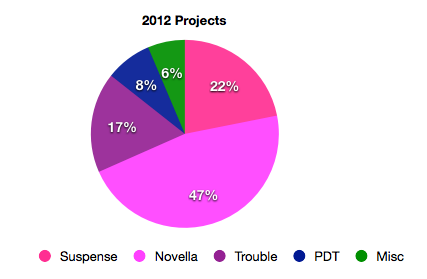 The rest of my 2012 word-count was in miscellaneous projects — scenes or character sketches for embryonic WIPs, notes for future projects, and openings that may never go any further.
Here’s how this looks in a chart, because why not?
Now for the less-good news:  I did not get to write “The End” on any of my projects — yet. I really thought I could get that last act on the Novella That Ate My Brain, but I made the mystery subplot far too complex and am still trying to figure out how to unravel the tangled mess I wove in acts one and two. However, I will. *Stomps foot* Yes, I will, damn it.
I’ll leave my resolution recap for another post, because it’s going to take me some more time to come up with good excuses write up my summary. But, in the meantime, I’m going to celebrate a 30-percent increase in word production and a lot of lessons learned in the last year.
Cheers to an even more productive and creative 2013!

I'm a writer and I live in California. I love dogs, red wine, and good books. I enjoy travel, taking photos, meeting people, learning new things, and trying out new recipes on my unsuspecting friends and family. View all posts by Ellie